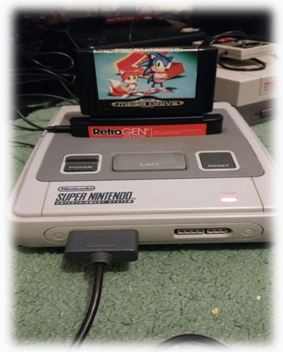 After all these years it is now possible to play Sonic the Hedgehog on the Super Nintendo by using something called RetroGen adapter.

The adapter goes into the cartridge slot of the SNES. On the top of the adapter is where the Mega Drive games slot in. On the right hand side on the adapter is the region switch. This allows you to play the games in either NTSC or PAL. NTSC seems to be better in terms of game play and sound. If you have games that are PAL sometimes they do not work on the NTSC format.

I have the PAL version of Aladdin. When I put it on to NTSC a message appears on the screen saying to use with PAL system only.

However with Sonic the Hedgehog it is fine. I have had no issues with it.

When you play the Megadrive games on the SNES you obviously use the SNES controller.

The adapter uses .A/V connection which comes out clear on screen.

The sound and picture quality are much better on the adapter then the original Mega Drive. I think this is maybe because I am using a PAL Mega Drive which is only 50hz, whereas NTSC is 60hz.

Overall I am impressed with this adapter and it is worth getting one.

The start of my gaming advenutre